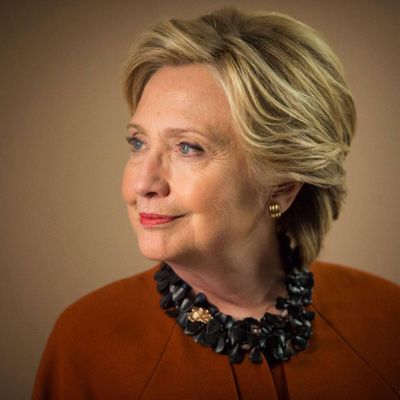 As soon as Clinton ended her 2008 Democratic presidential primary election campaign and conceded to Barack Obama, there was talk of her running again in 2012 or 2016. After she ended her tenure as Secretary of State in 2013, speculation picked up sharply, particularly when she listed her occupation on social media as "TBD". In the meantime, Clinton earned over $11 million giving 51 paid speeches to various organizations, including Goldman Sachs and other Wall Street banks. The speeches, and Clinton's not releasing their transcripts, would be raised as an issue by her opponents during the upcoming primary and general election campaigns. In October 2016, leaked excerpts from a Goldman Sachs Q&A session cast doubts about her support for the 2010 Dodd–Frank financial oversight legislation.

Anticipating a future run, a "campaign-in-waiting" began to take shape in 2014, including a large donor network, experienced operatives, the Ready for Hillary and Priorities USA Action campaign political action committees (PACs), and other campaign infrastructure.

By September 2013, amid continual political and media speculation, Clinton said she was considering a run but was in no hurry to decide. In late 2013, Clinton told ABC's Barbara Walters that she would "look carefully at what I think I can do and make that decision sometime next year"; and told ABC's Diane Sawyer in June 2014 that she would "be on the way to making a decision before the end of the year."

While many political analysts came to assume during this time that Clinton would run, she took a long time to make the decision. While Clinton said she spent much of the two years following her tenure, as Secretary of State, thinking about the possibility of running for president again, she was also noncommittal about the prospect, and appeared to some as reluctant to experience again the unpleasant aspects of a major political campaign. Those around her were split in their opinions, reportedly, with Bill Clinton said to be the most in favor of her running again, Chelsea Clinton leaning towards it, but several of her closest aides against it. She reportedly studied Obama's 2008 campaign to see what had gone right for Obama as compared to her own campaign. Not until December 2014, around the time of the Clintons' annual winter vacation in the Dominican Republic, did she say she decided for sure that she would indeed run again.